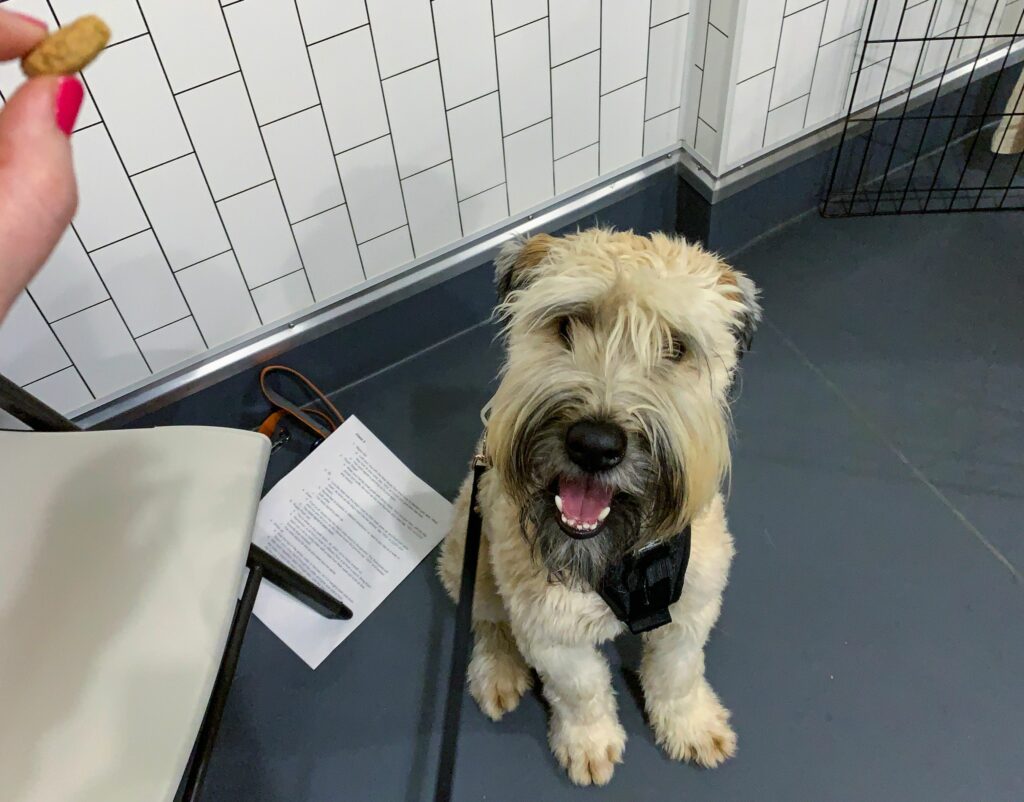 This post is written by Alyse Stokes, a freelance writer and longtime partner of District Dogs. The seven-part series will follow her new rescue pup, Nash, as he moves through District Dogs’ six-week Adult Basics training course. Posts will cover each week of the training program plus a follow-up post after graduation to see how Nash is doing with his training outside of class.

Although things have been very hectic for Nash’s dad and I over the past month, his training classes continued to provide a much-appreciated source of structure and consistency for our new rescue pup. Perhaps the biggest change though was in Nash’s handler for his training classes.

Due to District Dogs’ commitment to COVID-19 safety protocols, only one parent is allowed in the classroom with each dog. For the first two weeks, I attended class with Nash. However, we quickly realized that my years of experience with dogs both professionally and at home meant that I was not the best at communicating the training protocol to my husband after class. In short, I assumed basic knowledge about dog behavior on his part and he didn’t know what he didn’t know, preventing him from asking the questions needed to fill in the blanks. Turns out, professional dog trainers aren’t just more skilled at working with our dogs, they’re also better at teaching us!

To facilitate the best and most productive training experience for the whole family, we decided my husband would start attending class with Nash and would show me the things they covered after each weekly session. My background made it easier for me to ask follow-up questions about things he may have skimmed over or to intuit the reasoning behind each training skill. This change proved especially helpful since I spend more time one-on-one with Nash during the week while my husband is working in his home office. Now he would have all the information he needed to practice training protocols on their walks/runs together in the morning and evening, while Nash and I would work on training during the day.

Week Three: In the Classroom

While our Week One and Week Two classes focused on building a foundation for training—e.g., use of priming words and reviewing basics like sit, down, etc., our Week Three session was full of techniques to help manage Nash’s impulse control issues. Carissa guided the class through the beginning stages of mastering “Leave It”, “Come”, and loose leash walking.

This was the perfect week for my husband to begin attending class with Nash as all these skills—especially “Leave it” and loose leash walking—have the potential to make his walks and runs with Nash easier. Nash came to us with a pretty good leash walking style; he’s not a puller straight out of the gate. However, as is often the case with him, he easily becomes fixated on distractions whether they were enticing items on the ground or other dogs/people ahead of us or across the street. Once fixated on these distractions, he would also pull towards them and abandon his normally polite walking style.

I referred to learning the “beginning stages” of these skills earlier because all of these are skills that will take most dogs a longer time to master. Carissa informed the class that it’s normal and even expected for these behaviors—especially loose leash walking—to be the focus of your training efforts over several months.

When my guys got back from class, they immediately gave me a show-and-tell to cover the content of class. My husband was much better at show-and-tell since Nash was a little too excited from the fun of class. But the tiered approach to each command made things much easier to communicate to a pet parent who wasn’t in class. Instead of trying to share a complex set of instructions, my husband was able to cover the first phase of each skill with me. We were both then able to practice these smaller behaviors consistently throughout the following week.

Because the initial phase of each command was focused on getting Nash’s attention and teaching him to look to us for instruction/permission, most of our walks the following week were important training sessions that helped build Nash’s obedience foundation. Carissa had given us the helpful guidance that we should expect these training walks to be slower and shorter in distance than we were used to since there would be plenty of stopping to use our lures and review good behaviors with Nash. She also advised us to avoid greetings with other people and dogs on these walks to help reinforce to Nash that we were working.

Knowing this, we were careful to build in some purely fun walk time each day that let him enjoy a brisk pace and some dedicated sniffing/exploring. Often this looked like a structured walk to a local park where we focused on his training and then giving him some slack on the leash and the “okay” to sniff and explore once we reached the park. Building in these breaks was also helpful in letting him mentally unwind from the work of training. Our walk home from the park was usually a more relaxed stroll since training him when he was tired wasn’t conducive to getting good results.

Carissa’s commitment to explaining training psychology and theory proved especially helpful in these instances because she had shared that repeating a command over and over when your dog is clearly not able to focus and follow through can actually de-value that command. Saying “sit” over and over to a dog who is clearly overstimulated can ultimately teach the dog that the word “sit” is no longer associated with the behavior of sitting. This advice helped my husband and I both learn to read Nash’s responses better and to know when it was probably best to give him a break from training or when to revert to a simpler command that we knew he’d already mastered.

Heading into Week 4, we were already seeing positive growth in his response to “Leave It” and in his loose leash walking skills. Even when distracted, we could get him to look at us and check in. This ability to command his attention is the foundation of building his impulse control skills, and we were both excited to see him tackle the next level of these critical obedience skills.

Stay up to date with District Dogs!

PrevPreviousDaycare Capacity Limits to Be Enforced at All Locations
NextKennel Cough Cases on the Rise in DC; What Every Pet Parent Needs to KnowNext

Washingtonian: Nervous About a Reopening DC? Your Dog Probably Is Too.

People have been calling Patrick’s Pet Care owner Patrick Flynn sobbing. In the 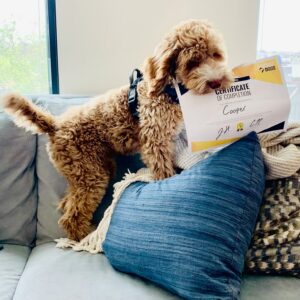 Class is in session! District Dogs is excited to announce new group training

After working in finance for a number of years, Jacob Hensley knew his

You love your pup.

Let Us Love Your pup, too.